skip to main | skip to sidebar

I promised it was coming, and here it is.

Ziggy has a new blog called Through Watchful Eyes. It's told from his perspective once again about the things that go down at our dawg house that he sees from the Bridge.

I'm not sure if this kind of blog will be accepted by the Blogger community, a fur kid who has passed over the Bridge that goes back to blogging, but to me it's worth a shot.

I hope you all enjoy it and plan to stop by.
Pawed by Guardian Angel Ziggy at 12:12 PM 4 comments:

Yesterday I learned that Bart, my aunt's Yorkie, passed away in his sleep from old age. Just like the rest of us she is torn from his loss. 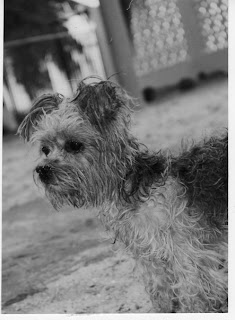 All of this sad news needs to stop. I'm sure everyone is just as sick of it as I am. Hopefully October will bring some better news and this year will end on a good note. I'm keeping my fingers crossed.
Pawed by Guardian Angel Ziggy at 10:56 AM 4 comments:

Just shy of his 12th birthday, Saffron sadly made the journey over the Rainbow Bridge. With a heavy heart his humans made the decision and helped him across this morning. Hopefully this sweet old man finds peace on the other side of the bridge as he watches over his heartbroken family.

Cancer is such a horrible disease for both animal and human alike. I just hope one day we will find some means of a cure and comfort for all of those affected...
Pawed by Guardian Angel Ziggy at 2:06 PM 20 comments:


Saffron is still struggling with his cancer. The VET put him on antibiotics, hes begun refusing his dog food, and drinking a lot of water... (very similar to our sweet Ziggy Boy). What the future holds for Sweet Saffron is very foggy... His humans are torn between trying to find him peace. 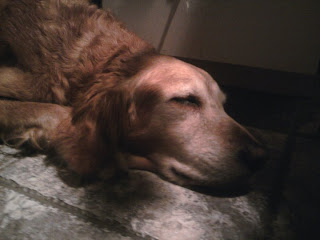 And now Natty Do... our Itty Bitty Kitty is having his own complications. We know all of our animals have big loving hearts, but Natty's really is big. The VET found he has an enlarged heart which causes him to suffer from oxygen deprivation when he gets too riled up. Blood pressure medication and a slower paced life style will hopefully help our sweet little guy. 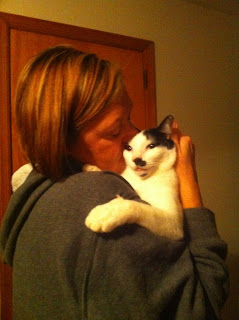 I've been thinking a great deal about Ziggy Boy lately. It just doesn't seem fair that he was taken away from our family so early with out any warning. It's been very hard with each passing day to accept his death, but I almost feel as if I can accept it now. All due to a simple book I randomly picked up at an airport.

The book is about a family who struggles through some really tough stuff (I won't go into details because it gives a good deal of the book away). But throughout their entire struggle, Enzo, the family's dog is there to support them though every step. The book is told through Enzo's eyes, which are very human, and shows just how human our furry friends can seem.

I find it amazing how a few simple words can hold such a great deal of meaning...

“In Mongolia, when a dog dies, he is buried high in the hills so people cannot walk on his grave. The dog's master whispers into the dog's ear his wishes that the dog will return as a man in his next life. Then his tail is cut off and put beneath his head, and a piece of meat or fat is placed in his mouth to sustain his soul on its journey; before he is reincarnated, the dog's soul is freed to travel the land, to run across the high desert plains for as long as it would like.

I learned that from a program on the National Geographic channel, so I believe it is true. Not all dogs return as men, they say; only those who are ready.

I think Ziggy was ready. I think he knew in the long run we would all be okay without him. I think he had learned all he could from his life as our wonderful dog and was ready. Ready for his soul to take the next step in life and become man.

I've been thinking about this a great deal lately, and I believe it applies to not just dogs, but all animals we love so dearly. Those once in a lifetime animals with such human like qualities. Those who always seem to leave us without us being ready. I think they know we will be okay. I think they ready. And for me it justifies his passing in a way I can accept and almost feel relief.

Car rides, milk bones, belly rubs (although gentile due to a swollen belly), table scraps, and extra walks. Saffron is surely being treated like a king. We've tried playing with toys, but for some reason Saffron really isn't a toy dog. But if Mother Nature keeps up with the hot weather we will have to go swimming in the pool! 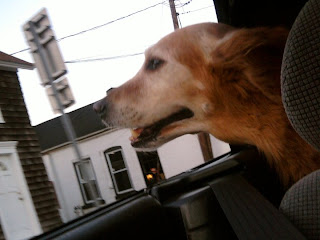 The recent posting has made me realize how much I missed blogging with all of my furry friends. I've decided to continue blogging, on Ziggy's blog, just not entirely about Ziggy. It might take some time for the new look, but I promise it will come. I'll also get back to visiting all of Ziggy's friends! Promise!

Thank you all for your kind words and encouragement. It means so much to us all that there are so many sending good vibes and good wishes to Saffron and his humans.
Pawed by Guardian Angel Ziggy at 9:10 AM 7 comments:

*Update* A Friend In Need *Update*


Blood work has come back for Saffron. The doctors have found that the cancer is in his liver and spleen. Although he doesn't seem to be in any pain or feel uncomfortable in any way, the doctors said it is only a matter of time... 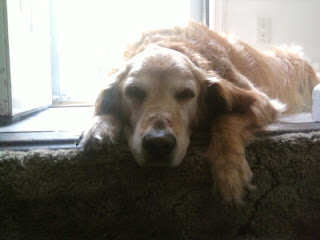 Although the news isn't the best we were hoping for, we're still glad to know we will have Sweet Saffron in our lives for a bit longer. Thank you all for your prayers and good vibes.
Pawed by Guardian Angel Ziggy at 1:53 PM 35 comments:

A Friend In Need

Hello everyone. It's Jessie here. I know it's been long over due for me to post, and I deeply apologize. It's been a very difficult year for everyone and it has taken a lot to get me thinking about posting again.
But unfortunately I come as a bearer of bad news. A a very familiar situation has sitrred up enough to get out a post... A very good friend of mine was diagnosed with cancer yesterday. This old man's family is heart broken by the sudden news, and I just want to ask if anyone has the time to send him some love, tail wags, and prayers. 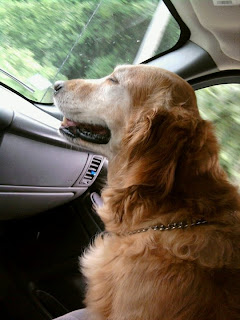 This is Saffron. My boyfriend Mike's ten year old Golden Retriever. He is a sweet, paitent, loving boy who means the world to his Daddy and Brother (boyfriend Mike). 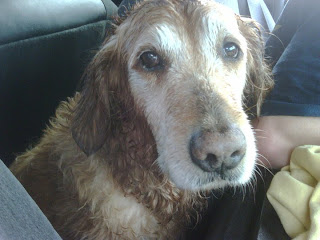 We're not too sure what the fate of this handsome old man is. But everyone is on edge hoping and praying for some good news... So if you have just a few spare moments, please send him some couraging thoughts.
I will try to keep everyone updated, and I hope I can bring some good news reguarding the uncertian situation.
Pawed by Guardian Angel Ziggy at 9:35 AM 6 comments:

The Power of Words

As I've been searching my memories I have found it simply amazing how one little word or phrase can have so much power and create such a reaction in another living thing. Ziggy had a few favorite words which he knew meant that something special was going to happen when he heard them. Each time we said one he would jump up, start panting, and wag his curly tail uncontrolably. Here's just a few of those words, which I'm very certain that many of you share with your own beloved's.

And just like with Ziggy's nicknames.... the list goes on. These words were not tricks (maybe "bath" and "get your duck" were) but they were still so special to Ziggy and I. Even some sounds were just enough to spark the enthuastic respond in Ziggy. The crinkle of a potato chip bag, the jingle of his collar, a creek in the floor coming from your room in the morning... 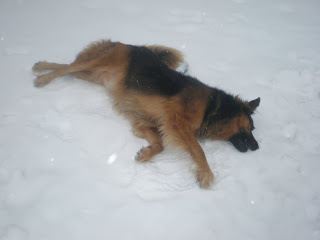 I wish I had one more chance to see the excitement in your eyes when we were going for a walk Boog.

That was his full name. But it was a very rare name you ever heard one of us using while talking to him. It was more of a name you would hear when a mother or father was upset with their child and calls their child by their first and middle name to give them a warning they were unhappy.

Although it has only been a day I have been constantly searching my mind for memories of Ziggy. In none of them did I ever call him by his full name. He never needed to be yelled at or given a second warning. He always knew the right thing to do, and although he may have put up a big of a playful struggle he would always come around just to please anyone who would give him love and attention.

One thing I have found while searching is that Ziggy had a ton of nicknames:

I miss you so much Boog, and I know you still listen when I call your name. 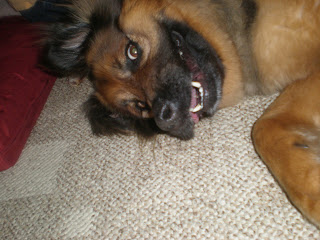 I think the thing I'm missing most is the sound of your nose hitting my door in the morning, telling me it's time to get up and play.

Hi! Nice To Meet You!

Guardian Angel Ziggy
Hi, My name is Ziggy. I am an nine year old German Shepard, Husky, Golden Retriever mix (German Goberian.) I watch over a house with four humans, three cats, a few outside feline visitors, and little Chihuahua named Pedro. Although my body may be gone, my heart will never leave my loving family. 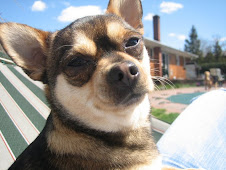 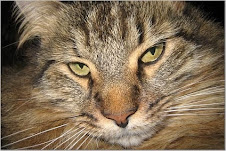 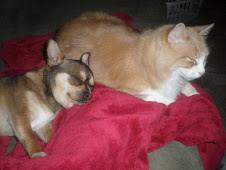 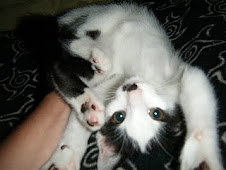 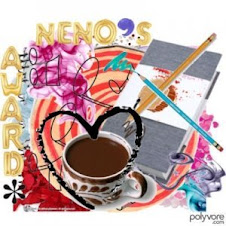 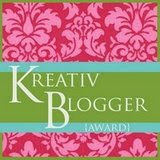